How to Set up Rooms Properly in Office 365

You'd think that setting rooms up in Office 365 would be a simple matter of going to the Office 365 Admin console, expanding Resources, clicking on Rooms and Equipment and then using the Add Button

This works but it doesn't do everything. If you want your rooms to appear in the Room List (and to show available times), you'll have to use PowerShell to put them there. 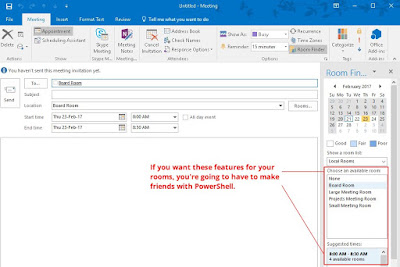 So... I spent a while trying to find the answers without a whole lot of luck. I think that coming from the Notes/Domino world and not being familiar with the outlook terminology hindered me a bit in this regard.

In any case, big thanks to IT for Dummies btw whose page called "Create Room List Office 365" made very little sense to me but helped me to explain to Microsoft Support what it was that I was looking for.

BTW: Microsoft support can be reached via the Support and then Service Requests options in the Admin Center. I've found their support to be excellent.

How to Set up Your Room
Having done the initial room creation steps (see the top of this post) you need to do the following to get it fully registered;

One last note... the Microsoft team told me that if I needed to add a room to the group, I would be best off deleting the Local Rooms group and running the creation/linking command again.

Thanks again to the Microsoft support team. I don't know how I would have figured this out without their help.

Gavin Bollard said…
It was a massive shock to me after not having to do anything spectacular to get calendars working in Domino all these years.
10:43 pm