OneDrive to Rule them all ... or perhaps not.

- February 06, 2017
Microsoft OneDrive is great! It's easy to use too and has some really great integration into Office 2016 - which means that when you go to save or open files, instead of displaying a file dialog, it renders the folder names right into the panel. Sadly the sharepoint integration in Office 2016 is still dialog-based.

On the surface, it looks like a great files storage solution but as it turns out, just like Tolkien's OneRing, beneath that shiny surface, OneDrive is mostly evil.

At work, we're still using an old file server which allows people in the company to save files into public, personal or restricted access areas.

It's a great browsable structure with the main drawbacks being that it's on a local file server (which means ageing infrastructure and semi-manual backup procedures) and security because it needs a VPN to get to our internal systems. Many of our users still find a VPN too complex to set up and it's hard to get a VPN that runs on all flavours of devices (various versions of iOs, Windows, Android and Linux) without compromising security.

The file server also has shadowing, which is a great feature -- and sadly, something that Windows finally "copied" from the old Novell Netwoare 3.12  (1991) - after more than a decade of broken promises. Shadowing is awesome and adds a layer of recovery to your systems, especially when it comes to attacks like Cryptolocker.

Having seen OneDrive personal in action, I was keen to get OneDrive for Business. It seemed obvious to me that this was the solution - A cloud version of the file server that was tighty integrated into Office 365.

OneDrive For Business is Still Personal!

OneDrive for Business is basically OneDrive personal with some more space.

I talked to Microsoft about the problem and they made it very clear.

"Do not use OneDrive if the intention is to Share Files"

There's a very good blog post that explains this -- and it includes a flowchart too!
https://en.share-gate.com/blog/you-should-not-be-migrating-to-onedrive-for-business

Apparently Sharepoint - team sites is the tool for this.

SharePoint is not the Answer

I looked at SharePoint and ran some tests to see how easily I could migrate our many years and many gigabytes of files shares.

Not easily at all.

With reluctance, we began looking elsewhere and stumbled upon Citrix Sharefile.

We've had a demonstration and thus far, this looks like it's the right answer. I'll post my findings once I've had a proper chance to play.

In the meantime, there's some great videos for Sharefile on YouTube and it looks like OneDrive is reduced to being an option for HOME drives only. For data that the company doesn't mind losing.

I'm very concerned that Microsoft doesn't seem to have an answer to the file sharing problem. Particularly when people will be expecting to move from On-Prem Microsoft file servers to their Office 365 cloud.
Citrix File Servers Microsoft Office 365 OneDrive Sharefile Sharepoint

Don't worry, I'm not patronizing you (my readers), I just decided to re-document this for one of our internal users and thought you might want to be able to use it in your own user documentation.
WHAT IS THIS DOCUMENT ABOUT? Some people who don't get a lot of mail, like to be notified when such an event occurs.
Notification can be; via a soundvia a pop-up boxvia the system tray (where the computer clock is)
The pop up box looks like this;

Other people, who like myself, get too much mail would rather not be notified. The aim of this document is to tell you how (and where) to turn these options on and off.

CHANGING YOUR SETTINGS To change your settings from the Notes 8.x client;
On the Menu, click File, then Preferences...On the left hand side, click on the little plus sign to the left of Mail to expand the options.Click on the option marked Sending and Receiving.In the middle section, under receiving, you can control your notifications.If you untick the box marked [_] Display a popu…
Read more

Why would you do this?
Suppose that you have an externally accessible generic email address for your company; support@mycompany.com or info@mycompany.com.

You might expose this to the web and allow people to send messages to you.

Setting up an auto-response email will tell the senders that their message reached its destination and that it will be dealt with accordingly.  It's also good practice to include links to FAQs or other useful information.

Why 8.5.3
The techniques we'll be using here work in older versions of Notes but some of the options seem to have moved around in 8.5.3.  I figured it was a good time to show you where they've moved to.


Start Domino Designer and open the Mail file to be modified.  A really quick way to do this is to right-click on the application tab and choose "Open in Designer".


In the Left hand panel of designer, expand Code and then double-click Agents.  A new window should appear. 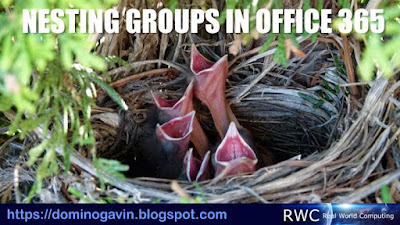 Nesting Groups has been a bit of a pain in Office 365 for a while now but there's apparently a few answers (and some updates on the way).

The Setup To start with, we're going to create a group in Office365 Admin. It should be a mail enabled security group.

In our example the group will be called;

GRP MotherGroup
and it will have an email address of MotherGroup@mydomain.com
(obviously the domain will be different at your location).


The PowerShell Commands As usual, you'll want to run PowerShell in Administrator Mode.