Thoughts on the Microsoft Surface Book 4 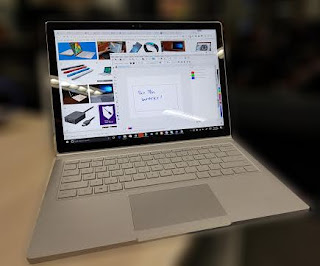 I've spent the last couple of months on Microsoft's Surface Book 4 (i7) and I've had enough time to form an opinion.

I generally hate laptops but I've found the Surface Book to be fast enough and easy enough to do the majority of my work on. The touchscreen is very responsive and I love being able to detach the tablet from the base - though admittedly, I rarely have a good business reason to do it.

We ordered around 45 of the devices all at once. One was DOA and another had batteries in the base that worked but dysfunctional batteries in the screen.  At around 4% failure it's probably still a reasonable return rate for hardware.

In terms of general use, the keyboard and trackpad are fine and the display is very clear. The processing power of the device is good and multi-touch on the trackpad and display are great too. The pen is currently a little useless and gimmicky but I've recently discovered that it works with the current version of Corel, so I may find a use for it yet.

While the Microsoft's dock for the surface book is amazingly simple to connect (it's magnetic and it sucks itself into the port when you wave it near the outlet), it's quite simply the words piece of functional technology I've seen in years. We've had nothing but trouble with them (on pretty much all of our surface devices).

Some of the problems undoubtedly relate to the difference in screen resolutions when using multiple monitors (the Surface's resolution of 3000 x 2000 is incredible). We've found that often when our people return from lunch that their external monitor, or the surface screen (or both) is blacked out. It's become such a problem that we've issued our people with a standard procedure for fixing most surface problems;


This fixes most problems.

The surface dock problems aren't confined to the screen either. I've had issues with the keyboard and the mouse losing power intermittently (seriously, the red light under the mouse goes out).

Even when the surface dock is working perfectly, the connections are a real pain and it's mind-boggling that they decided to include two display ports, instead of, for example, one display port and one HDMI port. It means that in almost every instance, we've had to get adapters for our monitors.

The surface is an incredibly good laptop marred by the worst dock in history. Buy a surface  but consider getting a port replicator from somewhere else.  It probably won't connect as easily but there's a better chance of it working.


Honesty clause: I just decided that a review of the surface might be a useful thing. We got nothing for free and purchased all of the hardware as part of work.