How to Duplicate the Mircrosoft Surface Hub's Screen on another Hub 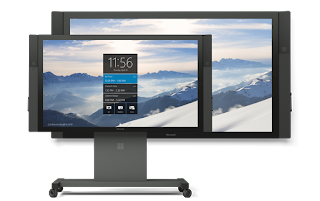 So, you've got yourself a few Surface Hubs and now you're having a big meeting. Big enough to need to use both hubs together.

In our case, we have two meeting rooms, each with a Microsoft Surface hub on the wall.  The rooms have a removable partition which enables it to be opened up into a large board room. Unfortunately, when this happens, the meeting participants can't always see the "master screen".

The ideal solution to this would be to have the display of the master screen duplicated on a "slave screen".  The diagram below illustrates this need. 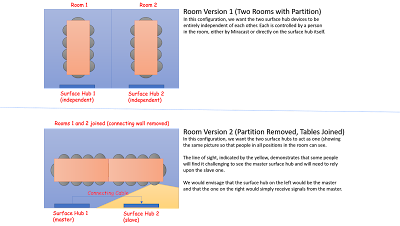 There are two ways in which the screen can be duplicated.  Method 1 involves skype. It's fairly easy to set up and requires no cabling. Unfortunately, because of generally slow internet speeds, it doesn't cope with high motion slideshows -- and it certainly doesn't cope with video.

The other method involves cables.

In this post, I want to cover off both methods. I'll be referring to the hubs as the "source", which displays the images and the "target" which receives the images from the source.

The skype method is really simple.


You will now be able to present on the source hub and have it display on the target.  For extra points, you could optionally include a laptop and share the screen to both hubs from there.

Bear in mind that while this method works, it can be a little slow to change slides and it's terrible with animation and video.

To use the cable method, you need to obtain a  DisplayPort to DisplayPort cable. The Microsoft specficiations suggest that 3 metres is the maximum length but you should be able to get it to about 5 meters without too much trouble if you use a quality cable.

The ports on the surface are confusing, to say the least as they're in reverse order on the 55" and 84" models.  They're also not labelled well at all, particularly not as a group of "input" or "output" ports. There's subtle arrows on the ports pointing into a box or out of a box. That's your indication of whether the port is an input or output one.

Additionally, there's an important slide switch which is simply marked with an exclaimation mark in a trangle.  If you slide this to the left (looking from behind the surface screens), it "turns the onboard computer off"  -- except it doesn't. The onboard computer seems to function well enough regardless of how the switch is set.

What the switch does do however is determine whether or not the surface will look at the input ports. This might be important if you were going to set up a permanent cable connection but only wanted it to be "active" sometimes.

Finally, on the target hub, you'll need to switch the input to Display Port.

HDMI and VGA are options

While HDMI isn't supported as an output format, you can have HDMI as an input. That's good because HDMI cables can be longer and you can get them with built-in repeaters though I haven't tested one -- yet.

You can also, apparently connect via VGA but since VGA doesn't carry sound, you'll want to connect the audio ports together too. I haven't tested this procedure.

The official Microsoft documentation on this is here.