Using Two PCs at Once - A Virtual KVM

At least, not until COVID-19 forced everyone to work from home and some of us found a need to switch between our home and work laptops with ease.

Not really wanting to purchase special hardware and extra cables, I looked for an alternative solution and found that Microsoft already had one. It's called Mouse without Borders. In this post, I just want to talk about getting it setup.

There's quite a few options around for Virtual KVMs but why would you pay for one when Microsoft provides one of the best for free?

Mouse without Borders is available from Microsoft Garage, it's a small (1.3 mb) download. In order for it to work, both machines need to be on the same network (which if they're on or near your desk, they will be).

It doesn't really do the V part of KVM but it does allow you to use a single keyboard and mouse to control multiple computers (and it has the added benefit of allowing you to copy and paste between machines).

Once you've downloaded the setup files on both computers, you'll need to go through the setup, accept the licence terms and let the install complete.

The configuration screens are driven by a welcome wizard which sometimes has trouble resizing for your display. I had problems on one of my Microsoft Surface devices, probably because it had third party graphics drivers. If you can't see the screen properly, just click skip.  You can do manual setup.

Choose a source machine (the PC one you use most frequently). Set the source machine up first.  If you're going through the wizard, you'll have to say No to the initial prompt of "Have you already installed Mouse without Borders on another computer".  You'll get a security code and machine name. Make a note of these as you'll need them later.

Repeat the installation on the target machine and choose YES to the initial prompt. You'll be prompted to enter the machine name and code, once you do that and verify, the machines will connect. From there, it's just a matter of moving your monitors around until it works the way you want it to. 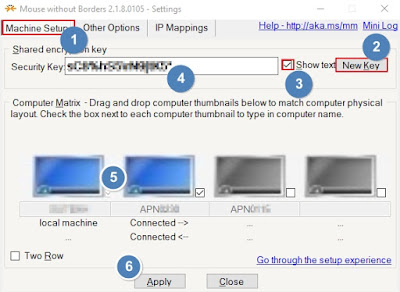 If you need to do manual configuration;
Now if you mouse over to the edge of your screen, the keyboard and mouse will automatically transfer to the next computer.